So today was an interesting day.   It started this morning when Dorianne informed me she had left her camera behind in the bistro last night.   Problem is the bistro only opens at 5pm so that drastically changed our plans for the day as we were now looking at spending another night here in Seyðisfjörður instead of heading southwest towards Skálafell. We had planned to head out at 9am to hike along the eastern fjords so we kept with that plan.   We just took a little detour to the bistro first to see if maybe, just maybe, there was someone there who could let us in.

And then miracle of miracles a lady pushing a stroller was going past the bistro and SHE HAD A KEY!   Unbelievable!   She let Dorianne in and she grabbed her camera.

We then continued onto the fjords where we took in the majestic mountains and flowing streams as the sun rose lighting up the cloudy grey sky. Soon we were on our way down the hill out of the city.   On our way there was yet another waterfall.   This one was different though.

It was right off the roadway and you could literally walk up to it.   I navigated through the snow and rocky ground to get as close as I could.   When I reached about 20 feet away I decided that was far enough as I took a step and my leg literally went knee deep into the snow bank.

After some photos and videos we were once again off towards Egilsstaðir where we briefly stopped for lunch yesterday.

After some gas and yet another yummy hot dog (this one had potato salad on it) we headed southwest towards Skálafell where we would spend the night.

But first a teensy little detour… It finally happened.   After 9 days on the road we got stuck on the side of the road.

Now before my mom or Dorianne’s mom starts freaking out – we’re fine and we we’re never in any danger.   Just a minor inconvience.

Now onto the story…

As we were driving along we had two options to get to Skálafelln.   One was all the way through on highway 1 and the other was a shortcut across on highway 939.

We did what we thought was the sensible thing and went on highway 1.   After all that is the main road and we figured if any road is going to be clear and safe to travel – it would be that one. 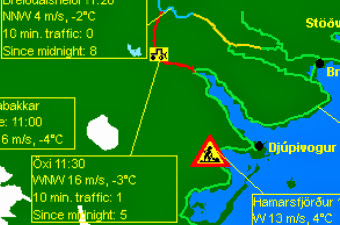 Dorianne even checked the little road map website that shows you the status of the roads around Iceland.   No patches of red (impassible) on the route.   Problem was she looked at the wrong route and little did we know we were now entering one of those patches of red.

We started down a winding steep icy road going extremely slow as we turned the corners.   And then, as we were driving on a straight stretch of road the car slid and we were stuck in a ditch.

After a few futile attempts of trying to reverse out of the ditch resulting in only spinning tires, we conceded defeat…By the way, here’s a 2 minute video of our ride through the slippery road eventually ending in a ditch:

Luckily I had brought my phone and had bought an Iceland sim card at the beginning of our journey for just this occasion.

A quick call to the emergency number 112 and then a transfer to the local police resulted in Ingolfur and his heavy duty truck stopping by an hour later.

First he positioned his truck uphill from us.   No easy task considering how icy the road was.   In fact as his truck came precariously close to the edge of the road it looked like he would roll off the road and down the ravine a few times.

Next he and his partner took a long rope out and attached it to our car.   And then, like clockwork, 5 seconds later we were pulled out of the ditch. It was so effortless and for good reason.   It seems we were the 3rd car he had pulled out of that stretch of road over the last 4 days.   In fact he says he pulls out about 30 each winter season.

A lucrative little business considering the 25,000 krona (about $220) price tag.   We didn’t care about the price though as we were just so thankful to have been rescued.

We followed them back to their tire shop to pay and we were, once again, on our way.

The drive to our final destination of the day was still another 3 hours away and thankfully the road the rest of the way was paved and clear. I was jolted in my seat as Dorianne slammed on the brakes just missing one crossing the road in front of us.   At first we thought it was a cow but then we looked to our left and saw the rest of the herd and saw those distinctive antlers.

Unfortunately the herd was pretty startled by us and raced off.   Our attempts to take pictures using our zoom focus in dark proved kinda futile so you’re just gonna have to believe us – we saw reindeer! After an hour of uncertainty of where exactly our guesthouse for tonight was located we finally, with a sense of relief, turned off the road to our home for the night – Guesthouse Skálafell.

After settling in we went back to the main house where our host had prepared a meal for us.   It was kind of weird being the only two in their restaurant and having a little old lady making a home cooked meal.

She served us both an asparagus soup to start.   Now, Dorianne is vegan and I asked our host earlier if she could whip up a vegan meal for her.   She said yes, no problem.   We were a little worried when she presented the soup and said it had no cream – just a little milk. Anyway, Dorianne left that to the side and we actually poured some of her soup into mine so it looked like she ate some.   We now were very curious to see what her main course would be.

Mine was a nice fresh dish of cod and Dorianne had a nice vegan meal of pasta with broccoli cakes and salad.   Aside from a little cheese on her salad we had success!

So, we’ll be here just for tonight and then head to Vik tomorrow before heading back to Reykjavik on Sunday.

Tomorrow we have a big day planned as we’re going to the Jokulsarlon Glacier Lagoon in the morning and then we have a two hour glacier walking tour in the afternoon.

Should be alot of fun – crossing my fingers for no problems… DAY
12A
Going through a phase. Well, actually three of them.
Whales, volcanoes and caves
Stuck in a ditch
Ice Ice Baby!
All wet!
Leave A Comment